On the 21st of February, a meeting of the EFCS Sport Management (SM) took place in Copenhagen. It was the first reunion of this management in its new composition since, last year, 5 new members had been appointed by the EFCS Executive Committee. 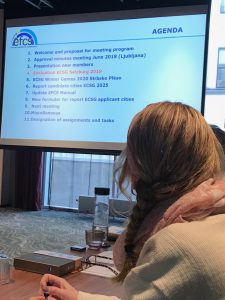 Once the official agenda had been completed, the group split up in 2 workshops to further discuss the future priority topics for EFCS Sport Management and to exchange ideas in the
Having fully understood the ‘obligation’ not to neglect the social aspect and in order to strengthen the feeling of togetherness, the Danish hosts put together a bowling competition with changing team compositions, thus creating lots of fun and a great atmosphere.
Finally, a big „thanks“ to the organizing committee of the Danish federation with Peder Bisgaard and Claus Schou for having created the perfect conditions for this meeting.
For a good understanding, SM chaired by Reinhard Sitzler is composed of vice chairwoman Galina Gorbatenkova (LAT), vice chairman Uwe Tronnier (GER), and members Yoram Arnstein (ISR), Dario Cinic (CRO), Claus Schou (DEN), Patrik Perosa (SLO), Thomas Le Lann (FRA), Anna Sundstrom (SWE), Branko Vujovic (SER), Velizar Djeric (SER), Wolfgang Grossmann (GER), Dirk Van Haelter (BEL) and Nikos Kerassovitis (GRE).